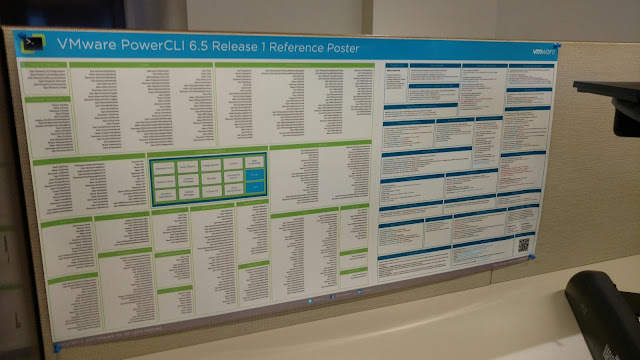 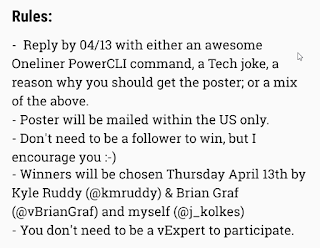 By Thursday evening, many people had replied to the different Tweets and the winners were announced:


Bruce Olschewski won the first poster with this Tweet:


Kyle later picked Benjamin Carrell as the second winner for his one-liner reply:

2nd #PowerCLI poster winner goes to @benjarell with this one-liner!
Big thanks to @J_Kolkes for putting the contest together! https://t.co/PEcFxGQgJP
— Kyle Ruddy (@kmruddy) April 14, 2017


Unbeknownst to Brian, Kyle and myself and by pure coincidence, the 2 winners, Bruce and Benjamin live relatively close by in Utah; I learned this when they both shared their addresses with me to ship the posters, so I resorted and agreed with Bruce to send him both items and he would reach out to the second winner. He recently confirmed that posters were received and that it only took him 3 minutes deviation from his route from work to meet with Benajmin.